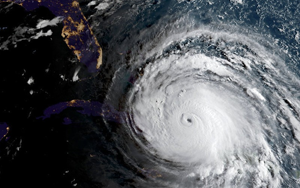 And so it goes with computational forecasts of important events such as weather, finance, and climate. Among all of this uncertainty, however, there are patterns, likelihoods, and rarities that inform important decisions that may affect billions of dollars in resources and thousands, or even millions, of lives. In the hurricane season on the eastern U.S., computational forecasting plays a central role in critical decisions that can determine allocations of emergency resources and the movements of people. The uncertainty and accuracy of these forecasts is an important part in making effective use of these sophisticated tools.

Scientists at the University of Utah and collaborating institutions, with the support of the National Science Foundation, are studying the role of uncertainty in computational models and its affects on the ways in which people interpret data and make decisions in the face of an unknown future. This research effort, a collaboration between researchers in computer science and psychology, develops and studies new ways to display or visualize uncertain information.

Out of this project has come a new visualization method — the curve boxplot — that is now part of the tools produced by the National Center for Atmosphere Research (NCAR) and proposed for use by the National Hurricane Center for summarizing the ensemble of forecasts produced by the weather models that predict the paths of hurricanes, such as Harvey or Irma. These ensemble forecasts can predict a large number of possible or likely paths for a hurricane. In turn, scientists, policy makers, and citizens must consider these ensembles and their associated uncertainty in making life-or-death decisions. The curve boxplot visualizations of hurricane paths show a typical hurricane path, the swath of space covered by most of the forecasts, and the behavior of outliers or atypical forecasts. These data summaries have been shown to produce interpretable depictions of uncertainty with lower cognitive load compared to showing all of the members of an ensemble.

The implications for hurricane forecasting are important. Better ways to understand and communicate forecasts could lead to better computational models and more acceptance of uncertain models by decisions makers and the public.

The implications of the work also extend beyond hurricanes. "As we rely more and more on large computational models and large-scale data analysis in so many aspects of our lives, such as medicine, finance, politics, etc., better tools for understanding certainty, accuracy, and risk will become crucial," said University of Utah School of Computing professor Ross Whitaker, a principle investigator on the project.