At the Hayden Planetarium, a Joyride Across the Cosmos 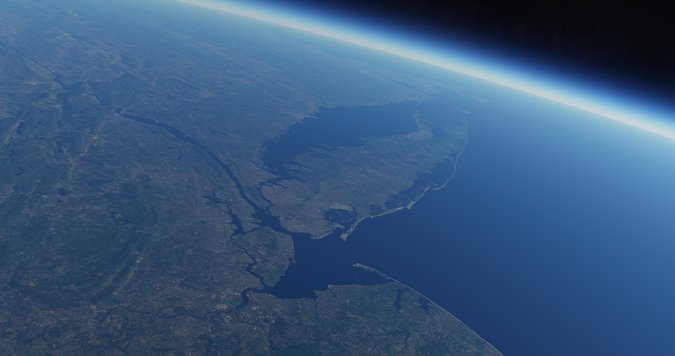 Carter Emmart used to want to go to space. Now he does, all the time — but virtually. And he likes to share.

On a recent afternoon, he took a visitor at the Hayden Planetarium, where he works, on a kind of joyride across the known universe. The lights dim. The inverted bowl of the planetarium’s screen comes to life. But the familiar, insectlike projector that displays the stars and constellations is stowed under the floor. Instead, projectors are reconstructing images onto the half dome from a desktop computer.

So there’s Mars, filling the screen, its reddish desert revealed as a landscape of mountains and valleys that make the Grand Canyon look like a puny arroyo. Flying around, we take in the sights, the surroundings uncannily close and detailed, so that boulders only a few feet across can be discerned.

From Mars there is a jaunt out to Pluto, seeing the famous heart-like feature on the one-time planet’s surface. He points out “a liquid nitrogen sea with floating blocks of ice that are about as strong as steel.”

Zooming out from there, we go past the edge of the solar system, into the galaxy and beyond, where the computer mapping encompasses billions of stars and, most likely, trillions of planets. And then we head back home to the swirling blue ball of Earth.

These stunning images are not artists’ renderings, but computer images and data combined and translated into a stunning travelscape. This hourlong journey is, in fact, also a tour of reams of data collected from spacefaring robot craft. The orbiting Mars Reconnaissance Orbiter gathered the startlingly detailed and three-dimensional images of Mars — a continuous quilt so vast that Mr. Emmart often finds himself seeing new neighborhoods he hasn’t encountered before.

The New Horizons spacecraft got us to Pluto, which it blasted past in 2015. The European Space Agency’s Planck satellite provided some of the farthest-out imagery, the heat map of the cosmos that can show us the incubators of tomorrow’s galaxies. And all of it can be displayed by the kind of brawny gaming computer that can be purchased at Best Buy. It’s a lot of data, and the images occasionally stutter. Hollywood, it isn’t. But it’s still, let’s face it, awesome.

The software that allows the museum to perform this magic is called OpenSpace, and NASA gave the American Museum of Natural History, which houses the planetarium, $6.3 million to develop it. Mr. Emmart, as the museum’s director of astrovisualization — and how great a title is that? — gets to use it.

The software, which is being developed with the help of graduate students from Sweden, high school students in New Jersey and institutions like New York University and the University of Utah, among others, can be run on all kinds of displays, even touch tables and kiosks. Other planetariums and science museums around the world can use it to give their own visitors the chance to fly through the universe. Presentations can be coordinated for live shows across institutions, and the other users can dig into the guts of its open-source software to help refine and develop it.

The point of OpenSpace, said Vivian Trakinski, the museum’s director of science visualization, is “for presentation of current science to the public,” exploring data in accessible ways. “And,” she said, drawing out the “aaaa” a bit, “it’s cool.”

The software can use images and data collected in real time, which is what Mr. Emmart wants to show on the return to Earth. “As much as I like to take people to Mars, they say, ‘could we come back to Earth now?’ to see something familiar,” he said.

The globe hangs full in the “sky” above the planetarium, built from fresh satellite images. Zooming in, Mr. Emmert shows the night lights of Beijing and the eerie darkness of power-starved North Korea, versus the shining cities of South Korea, and a zip across major cities of the United States.

For those who can’t pay Richard Branson’s Virgin Galactic a quarter of a million dollars for a quick suborbital trip — a long-promised service that still has not begun flights — “we can show you what it looks like to go to space, and you can go to dinner across the street,” Mr. Emmart said.

In New York, the next presentation using OpenSpace will be on March 24, at a program known as Sun Earth Day, with no charge beyond general admission.

While the wow factor of the software is the way that it helps people travel beyond the planet’s pull, the underlying message is that there’s no place like home. This planet, teeming with life and color, is the proof that “our place is here,” Mr. Emmart said. Other places are, literally, alien: “If you go to the Moon, it’s gray; if you go to Mars, it’s reddish.”

“This kind of data visualization makes us appreciate Earth,” he said, “And our need to just manage ourselves with it better. We have no choice.”